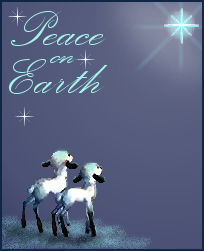 My girls will be copying A Christmas Alphabet this week. I found it at Kath’s Christmas Corner (she has lots of great ideas!). I did alter the verses a bit by changing them to English Standard Version and lengthening some of them. We are using these lovely pages from NotebookingPages.com

A – is for Angels, appearing so bright, telling of Jesus that first Christmas night.  And suddenly there was with the angel a multitude of the heavenly host praising God and saying,”Glory to God in the highest, and on earth peace among those with whom he is pleased!” Luke 2:13-14

B – is for Bethlehem, crowded and old, birthplace of Jesus by prophet foretold. But you, O Bethlehem Ephrathah, who are too little to be among the clans of Judah, from you shall come forth for me one who is to be ruler in Israel, whose coming forth is from of old, from ancient days. Micah 5:2

C – is for Cattle, their manger His bed, there in the stable where He laid His head. And she gave birth to her firstborn son and wrapped him in swaddling cloths and laid him in a manger, because there was no place for them in the inn. Luke 2:7

D – is for David and his ancient throne promised forever to Jesus alone. He will be great and will be called the Son of the Most High. And the Lord God will give to him the throne of his father David.
Luke 1:32

E – is for East, where shone the bright star which Magi on camels followed afar. Now after Jesus was born in Bethlehem of Judea in the days of Herod the king, behold, wise men from the east came to Jerusalem, 2saying, “Where is he who has been born king of the Jews? For we saw his star when it rose and have come to worship him.” Matthew 2:1-2

F – is for Frankincense, with myrrh and gold, brought by the Wise Men as Matthew has told. And going into the house they saw the child with Mary his mother, and they fell down and worshiped him. Then, opening their treasures, they offered him gifts, gold and frankincense and myrrh. Matthew 2:11

G – is for God, who from heaven above sent down to mankind the Son of His love. For God so loved the world, that he gave his only Son, that whoever believes in him should not perish but have eternal life. John 3:16

H – is for Herod, whose murderous scheme was told to Joseph in a nocturnal dream. An angel of the Lord appeared to Joseph in a dream and said, “Rise, take the child and his mother, and flee to Egypt, and remain there until I tell you, for Herod is about to search for the child, to destroy him. Matthew 2:13

I – is for Immanuel, “God with us,” for Christ brought man back to the Father’s house. Therefore the Lord himself will give you a sign. Behold, the virgin shall conceive and bear a son, and shall call his name Immanuel.  Isaiah 7:14

J – is for Joseph so noble and just, obeying God’s word with absolute trust. When Joseph woke from sleep, he did as the angel of the Lord commanded him: he took his wife, Matthew 1:24

K – is for King. A true king He would be, coming in power and authority. Rejoice greatly, O daughter of Zion! Shout aloud, O daughter of Jerusalem! Behold, your king is coming to you; righteous and having salvation is he, humble and mounted on a donkey, on a colt, the foal of a donkey. Zechariah 9:9

L – is for Love that He brought down to earth that night in the stable in lowly birth. In this the love of God was made manifest among us, that God sent his only Son into the world, so that we might live through him. I John 4:9

M – is for Mary, His mother so brave, counting God faithful and mighty to save. And Mary said, “Behold, I am the servant of the Lord; let it be to me according to your word.” Luke 1:38

N – is for Night, when the Savior was born for nations of earth and people forlorn. And in the same region there were shepherds out in the field, keeping watch over their flock by night. Luke 2:8

O – is for Omega, meaning “the last;” He’s eternal: present, future and past. I am the Alpha and the Omega, the first and the last, the beginning and the end.”
Revelation 22:13

P – is for Prophets, when living on earth foretold His redemption and blessed birth. I see him, but not now; I behold him, but not near: a star shall come out of Jacob, and a scepter shall rise out of Israel. Numbers 24:17

Q – is for Quickly, as shepherds who heard hastened to act on that heavenly word. And they went with haste and found Mary and Joseph, and the baby lying in a manger. Luke 2:16

R – is for Rejoice. The sorrow of sin is banished forever when Jesus comes in. And you will have joy and gladness, and many will rejoice at his birth. Luke 1:14

S – is for Savior. To be this He came; the angel of God assigned Him His name. he will bear a son, and you shall call his name Jesus, for he will save his people from their sins.” Matthew 1:21

T – is for Tidings related to all, telling of Him who was born in a stall. And the angel said to them, “Fear not, for behold, I bring you good tidings of great joy that will be for all the people. Luke 2:10

U – is for Us, to whom Jesus was given to show us the way and take us to heaven. For unto you is born this day in the city of David a Savior, who is Christ the Lord. Luke 2:11

V – is for Virgin, foretold by the sage, God’s revelation on prophecy’s page. “Behold, the virgin shall conceive and bear a son, and they shall call his name Immanuel”
(which means, God with us). Matthew 1:23

W – is for Wonderful, His works and His words, the King of all Kings, the Lord of all Lords. For to us a child is born, to us a son is given; and the government shall be upon his shoulder, and his name shall be called Wonderful Counselor, Mighty God,
Everlasting Father, Prince of Peace. Isaiah 9:6

X – is for Christ. It’s X in the Greek, Anointed, Messiah, Mighty, yet meek. God anointed Jesus of Nazareth with the Holy Spirit and with power. He went about doing good and healing all who were oppressed by the devil, for God was with him. Acts 10:38

Y – is for Yes, called God’s Yes in His Word; God’s answer to all is Jesus the Lord. For all the promises of God find their Yes in him. That is why it is through him that we utter our Amen to God for his glory. II Corinthians 1:20

Z – is for Zeal as it burned in Christ’s heart. Lord, by thy Spirit to us zeal impart. His disciples remembered that it was written, “Zeal for your house will consume me.” John 2:17